in the section: Random

Accountex 2018 went down last week at the Excel in London. Titled the largest UK conference for the accountancy sector, it attracted the attention of a few thousand professionals, including yours truly. So on Wednesday I shaved, hopped on an Uber and went to check it out. These are my impressions...

On my SimpleTax days, I kept reading about Accountex and tried attending a couple of times but never really got around to do it. Even though I went to Manchester early in the year for the first Accountex North, I had never attended the main show and wasn't quite sure what to expect.

A tech conference by any other name is just as sweet...

The very first thing that struck me is how technology oriented the conference is. In fact, I think one would be excused to think it's a typical technology conference. A very large number of startups can be found manning the various stands, alongside a decent number of more "mature" software suppliers. There were also a lot less suits than in Manchester 😆 Overall the vibe seemed a bit more casual, making Accountex a nice break from hectic work days.

At any one time, 14 stages were in full operation to support over 120 sessions across 2 days. There was always something interesting going on, covering a wide range of topics such as HMRC's MakingTaxDigital, to what accountants need to care about Initial Coin Offerings.

Trying to stay organised, I made an attempt at:

Most of these plans went out the window right away, as I kept bumping into familiar faces and opted  to catch-up with them.

That said, I did manage to attend a couple of unmissable sessions: Alex Falcon on "The Falcon stack and Accountechs", and James Ashford on "Stop working so hard, give more value and make more money". 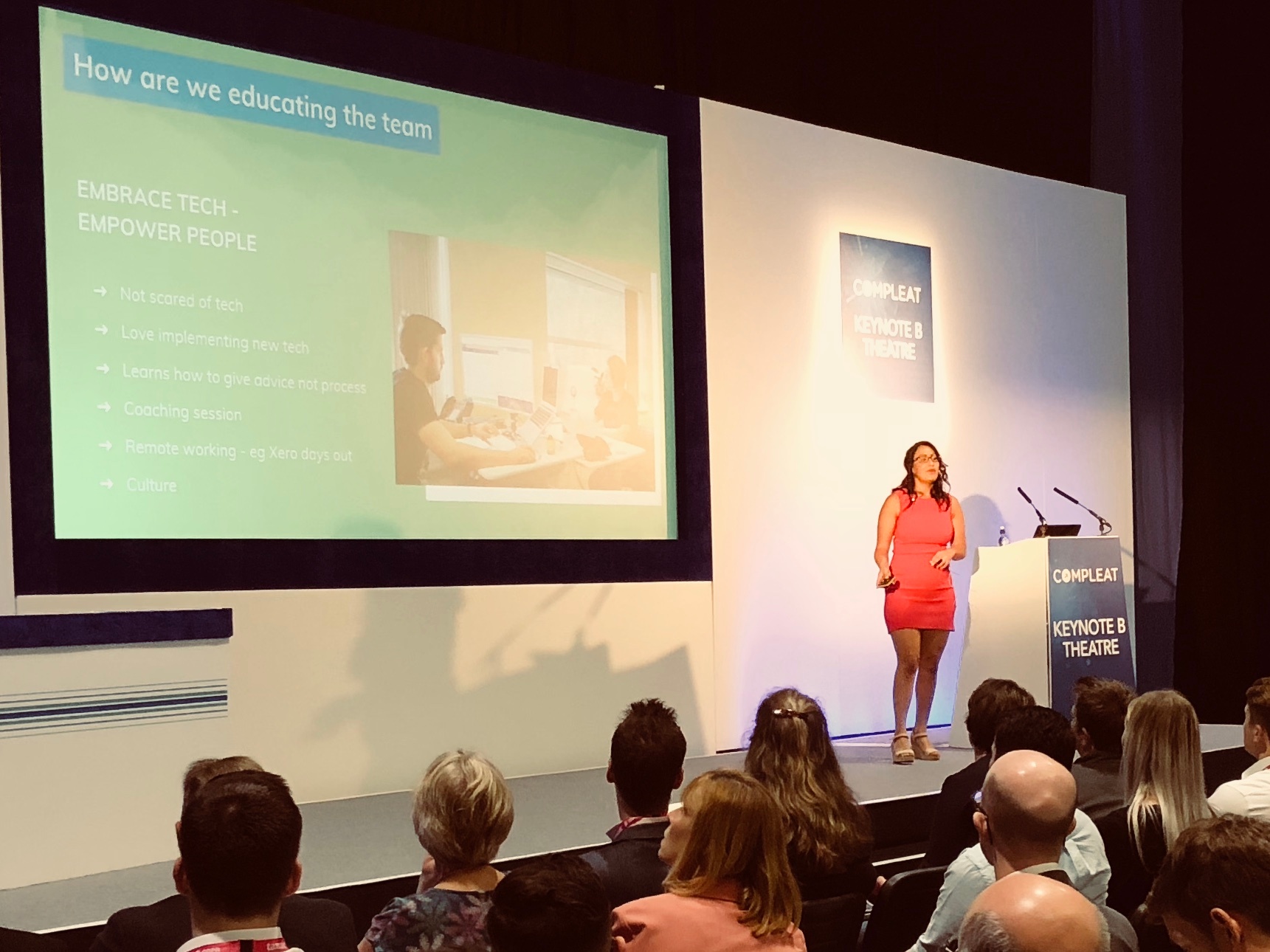 In her session, Alex was very open about how she runs her operation. From describing her process to set up the technological foundation of the firm, to how to evaluate which apps to use, along with pitfalls that one will inevitably face when running an accountancy firm.

As much as I enjoyed the tech part, it was when Alex began describing the culture at the firm and how she's working to make all of that work that, for me, things got really good. I found it very refreshing to see how in a sector frequently associated with high staff churn, a lot of care is being put into educating and empowering staff.

The second session I made sure to attend was James Ashford's. James is probably the best speaker in the sector right now. It's impossible to sit through one of this talks and not come out with energy levels at 11!

This session covered two things that need to work in tandem for improving the odds of growing a practice: fanatical customer service and exceptional marketing.

If you have the chance to sit through a session with James do it. It's guaranteed to inspire you on ways to improve client relationships.

Vendors to keep an eye on

As I wrote above, there's no lack of choice in terms of technology suppliers exhibiting at the conference. All the big names are there but I find them a bit boring, as their stands are full of sales people. So I decided to check out the smaller vendors and get to speak to the entrepreneurs. Here's a list of vendors that caught my eye:

It's all about the people...

The last component of any conference is the ability to meet people in the flesh. For me it was a pleasure to finally get to meet Heather Townsend of the Accountants Millionaire's Club, Marcus Howarth of DigitalTax (an early Pixie customer!), Cameron John of Sage, and Ben Smith from AccountingWeb.

And of course to catch up with great people such as Richard Sergeant, Bobby Chadha, Florian from FinPoint, Michael and Andrew from Telleroo (keep an eye on them!), Amanda Swales from SimpleTax.

See you next year!

Get content to help you improve your practice delivered to your inbox.

Pixie's use of information received from Google APIs adheres to Google API Services User Data Policy, including the Limited Use requirements.